On a quiet street in Island Heights along the Toms River sits a historic Victorian house (built in 1879-1880-the Robert Given House) that is bustling with excitement and creativity. It is the Ocean County Artists’ Guild. It all began in 1957 when a group of artists, led by Edna Feerick, gathered to paint, chat and share ideas about how to promote visual arts in the community. The group grew and by 1960, there were thirty members, dues were $3 and fundraising began to support the group’s ambitions for shows. There were exhibits in hotels, banks and outside on clotheslines.

In 1973 Edith Grace graciously donated the house, the Guild’s present home, in honor of her late husband. Even back then, there was much trepidation about how the house would be maintained. The group held an auction of some of the items in the house, still maintaining the Victorian parlor, and the spirit prevailed. Ethel Fishberg came aboard, and as president created the newsletter and the group developed a gift shop and began the gallery shows.

Now, sixty years later, with a membership of over 400 and a dynamic calendar of events, the spirit continues to thrive. In keeping with the needs of the community, in 1998, we began a campaign to build an addition to our building that would be in keeping with the historic Victorian architecture and would also be barrier-free. Fittingly, a bequest by the late Ethel Fishberg gave our fundraising campaign a jump start. We have held plant sales, garden tours, bus trips and raffles and a grand art auction to finance this project. With the help of donations from members, friends, and foundations, we join together to celebrate the completion of our addition and renovation of our lovely Victorian building. The extension is accessible to the physically challenged and can accommodate the growing number of people who attend demonstrations, workshops, and classes. 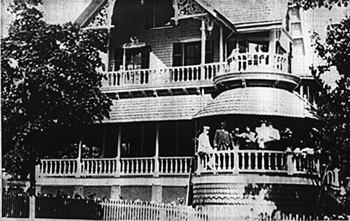